Trace is on the road a lot with Craig: attending meetings, taking notes, and then preparing reports. In that role, Trace is in the field working with clients and helping to capture all those good group decisions. And whenever we play background music at meetings during breaks or meals, Trace is a pretty awesome DJ! 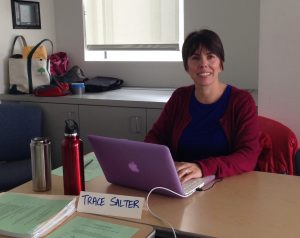 Most recently, Trace was one of the Founders that launched the Circus Conservatory of America in Portland, Maine. She helped build the recreational and college programs by establishing partnerships with local and international stakeholders from schools in Maine to Cirque du Soleil in Montréal. Prior to that, Trace served for eight years as the Circus Coordinator for Merriconeag Waldorf School in Freeport where she managed all aspects of the school’s presentation of the Circus Smirkus Big Top Tour.

Prior to moving to Maine in 2001, Trace lived and worked in England, France and the Netherlands. During her stint in Europe, Trace worked for four years as a Researcher and Campaigner at the International Secretariat of Amnesty International in London. She conducted investigations into human rights violations in the United Kingdom, promoted adherence to international legal standards and wrote campaign material for the global membership.

Trace is committed to supporting people-in-need wherever possible and teaches English at Portland Adult Education, assists and/or participates in service trips to Haiti with Partners in Development and serves at the Preble Street Resource Center in Portland. She also gives ample time to the schools her children attend in Freeport.

Raised in New Hampshire, Trace attended Simmons College in Boston where she earned her BA with distinction in International Relations and French. She is pursuing her MA that she began at Middlebury College in Vermont. Locally, Trace completed a fundraising program at the University of Southern Maine. Currently, she takes every chance she can to learn more about teaching English to speakers of other languages. Trace is particularly interested in helping new Mainers acquire the language skills they need as a tool to create community and to forge a new life in America.